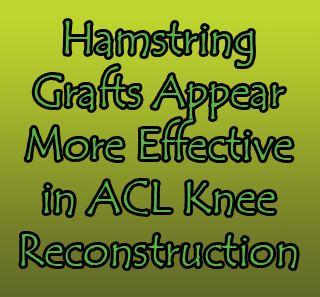 At the time of the study, 180 knee reconstruction patients were evaluated. While 90 comprising 48 men and 42 women between the ages of 15-42 years underwent a patellar tendon (PT) graft, 90 including 47 men and 43 women between the ages of 13-52 years received a hamstring tendon (HT) graft. On completion of five years, 80 percent of the PT group and 73 percent of the HT group were made to reveal their symptoms of pain, swelling as well as knee mobility. It then appeared that the HT group had significantly higher activity levels than the PT group.

“While we have seen excellent results in terms of knee symptoms and function with both graft types, comparing the two definitely showed differences,” added Leo Pinczewski, MD, lead researcher and surgeon with the North Sydney Orthopaedic and Sports Medicine Center in Wollstonecraft, Australia. “Patients with a hamstring graft reported less knee pain and discomfort and demonstrated a higher activity level.”

From the HT group 77 percent and 62 percent belonging to the PT group were probably able to perform at least strenuous activities. Moderate or greater pain when kneeling was apparently endured by 42 percent of the PT group patients and 26 percent of the HT group. Worse outcomes in tests for motion loss and osteoarthritis were reported by patients from the PT group. Authors were supposedly unable to figure out the precise reason why heightened osteoarthritis in the hamstring tendon graft was uncertain.

The study was presented at the American Orthopaedic Society for Sports Medicine’s Specialty Day in San Diego, California.