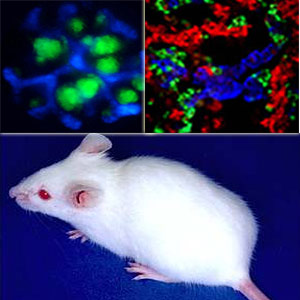 If this can successfully be repeated in domestic animals, doctors will be able to use this technique to replace damaged organs in humans without the need for a donor.

Lead research Professor Hiromitsu Nakaushi of the University of Tokyo said, “We have made a step forward in realizing a technique to produce human organs inside the bodies of domestic animals but we need to clear safety and ethics issues from now on.”

For this research, the team injected embryonic stem cells from healthy mice into eggs of genetically engineered mice that did not grow kidneys and pancreases three days after fertilization and then implanted the eggs into surrogate mice.

The newborn mice turned out to have both kidneys and pancreas and the researchers even confirmed that they were derived from the embryonic stem cells while vascular tracts and nerved were those of the host mice.

The researchers have also said that both the kidneys and pancreas functioned normally.

It is known that in such regenerative research which uses embryonic stem cells, there is a risk of developing cancer in the subject. However, the researchers from the University of Tokyo confirmed that the rodents used in their experiment did not develop any form of cancer.

They also said that they now have plans to test this technique on monkeys as well as pigs to make sure that it is safe.