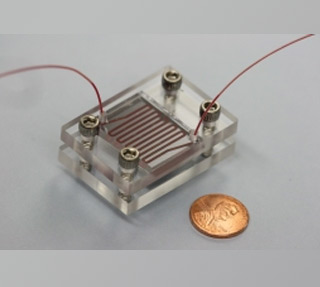 The following method may enhance diagnosis and treatment-monitoring of cancer. A UCLA research team has now developed an innovative device based on Velcro-like nanoscale technology to detect and grab circulating tumor cells or CTCs in the blood. Since CTCs are known to play a major role in cancer metastasis, the invented technology allegedly has great significance among doctors treating cancer patients.

During the research, scientists claim to have displayed a successful demonstration of nano-Velcro technology which is engineered into a 2.5-by-5–centimeter microfluidic chip. This second-generation CTC-capture technology was probably capable of enriching rare CTCs captured in blood samples collected from prostate cancer patients. The newly introduced approach is not only faster, but also cheaper than existing methods. This technology that supposedly captures a greater number of CTCs, involves a nanopillar-covered silicon chip.

The chip’s ‘stickiness’ possibly resulted from the interaction between the nanopillars and nanostructures on CTCs known as microvilli. Researchers believe that the new, second-generation device adds an overlaid microfluidic channel to produce a fluid flow path that increases mixing. Along with the Velcro-like effect from the nanopillars, the mixing produced by the microfluidic channel’s architecture may boost the CTCs contact with the nanopillar-covered floor, further enhancing the device’s efficiency.

“This new CTC technology has the potential to be a powerful new tool for cancer researchers, allowing them to study cancer evolution by comparing CTCs with the primary tumor and the distant metastases that are most often lethal,” shared Dr. Kumaran Duraiswamy, a graduate of UCLA Anderson School of Management who became involved in the project while in school. “When it reaches the clinic in the future, this CTC-analysis technology could help bring truly personalized cancer treatment and management.”

Once the blood samples flow at a great speed in the device, the cells purportedly bounce up and down inside the channel, slam against the surface and get caught. Hence, a wider number of CTCs are seemingly captured. The crafted device appears user-friendly with a semi-automated interface that enhances the earlier device’s purely manual operation.

The research is published in the journal Angewandte Chemie.

Weightlifting increases Risk of Glaucoma due to increased Pressure in the...