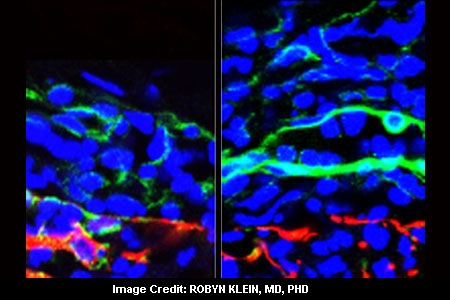 Multiple sclerosis (MS) is often believed to be a result of misdirected immune cells entering the brain and damaging myelin. Well, this debilitating condition can now be tackled, or at least the following article suggests so. Investigators from the Washington University School of Medicine in St. Louis claim to have blocked harmful immune cells from entering the brain in mice with MS.

In the course of the investigation, experts laid hands on a chemical stairway that immune cells have to climb down to enter the brain. Immune cells presumably exit the blood, remain along the vessels on the tissue side and climb down from the meninges into the brain. It is at this site that the cells can supposedly cross additional barriers and attack myelin on the branches of neurons. The stairway is probably located on the tissue side of the microvasculature, tiny vessels that carry blood into the central nervous system. These steps are allegedly made of a molecule named CXCL12 that localizes immune cells.

Researchers found that the blood vessel cells of the microvasculature pinpoint copies of this molecule on their surfaces. It was also revealed that MS makes CXCL12 to be pulled inside blood vessel cells in humans as well as mice. Scientists seemingly blocked the internalization of the molecule, prevented immune cells from getting into the brain and doing harm. A receptor binding to CXCL12 known as CXCR7 is possibly made by the same cells in the microvasculature that display CXCL12. The receptor purportedly take copies of CXCL12 and dump them in the cells’ lysosomes, which are pockets for breakdown and recycling of molecules the cell no longer require.

“The results were so dramatic that we ended up producing early evidence that this compound might be helpful as a drug for MS,” quoted Robyn Klein, MD, PhD, associate professor of pathology and immunology, of medicine and of neurobiology. “The harmful immune cells were unable to gain access to the brain tissue, and the mice that received the highest dosage were protected from disease.”

Once the cargo is dumped in the lysosome, the receptor may go right back to the cell surface to pull in another copy of CXCL12. It seems that there is an equilibrium between expression and disposal of CXCL12. Some of the proteins expressed by the immune cells in MS patients are assumed to affect CXCR7 expression and activity. As a result, the equilibrium is disturbed and the steps from immune cell stairway are possibly stripped. A blocker of the CXCR7 receptor designed to fight cancer was given to the mouse model of MS. Positive outcomes were then registered by the scientists.

The research is published in The Journal of Experimental Medicine.