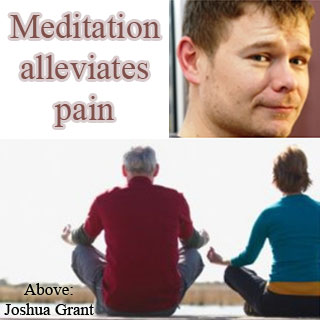 Zen meditation is an old form of meditation that balances the physical, emotional and mental being of an individual. The main purpose of the study authors was to verify whether pain sensitivity of the trained meditators was different from the non-meditators.

Joshua A. Grant, doctoral student in the Department of Physiology, says that, “While previous studies have shown that teaching chronic pain patients to meditate is beneficial, very few studies have looked at pain processing in healthy, highly trained meditators. This study was a first step in determining how or why meditation might influence pain perception.”

Co-author, Pierre Rainville, a researcher at the Université de Montréal, along with Grant employed around 13 non-meditators and 13 Zen meditators with a minimum of about 1,000 hours of practice. Both these groups had to undergo a pain test, where their different reactions were gauged. The pain test that they had to undergo was a heating plate at varying temperatures was brought in contact with the calves of the subjects as per their individual pain sensitivity. This computer controlled heating plate’s heat temperature could vary from 43 degree Celsius to about 53 degree Celsius.

The results obtained showed that some of the meditators could withstand the maximum temperature while all the non-meditators were well below 53 degree Celsius. The study investigators noticed that Zen meditators, outside their meditative state, could withstand pain much more than the non-meditators. It is further stated that in meditative state the meditator’s pain sensitivity was even lower, through slow breathing.

Grant says that, “Slower breathing certainly coincided with reduced pain and may influence pain by keeping the body in a relaxed state. While previous studies have found that the emotional aspects of pain are influenced by meditation, we found that the sensation itself, as well as the emotional response, is different in meditators.”

It was noticed that the Zen meditators underwent 18 percent pain reduction in pain intensity as compared to the non-meditators. The study investigators state that the possibility that meditation reduces pain sensitivity could be useful for reducing the amount of pain medication prescribed for an individual.

Their findings are published in the Psychosomatic Medicine edition.