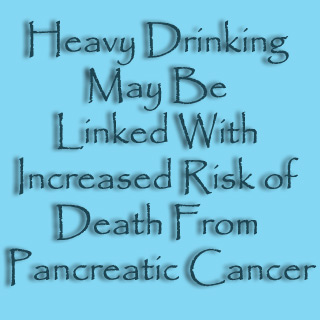 Heavy alcohol consumption may be responsible for acute and chronic pancreatitis. Well, it seems that this modifiable lifestyle factor is also involved in pancreatic cancer. A groundbreaking study claims that drinking three or more glasses of liquor everyday elevates the risk of death from pancreatic cancer.

At the time of the study, data from the Cancer Prevention Study II (CPS-II) was thoroughly scrutinized. Investigators also evaluated initial information on alcohol consumption in 1982. 6,847 pancreatic cancer deaths were registered from a total of one million participants. The study encompassed 453,770 men and 576,697 women. 45.7 percent of men and 62.5 percent of women were non-drinkers. It was observed that consumption of three drinks per day and four or more drinks each day heightens the threat of death from pancreatic cancer.

Investigators add, “Findings from the prospective study presented herein strongly support the hypothesis that alcohol consumption, in particular heavy intake, also is an independent risk factor for pancreatic cancer, the fourth most common cause of cancer mortality [death] in the United States.”

As compared to non-drinkers, drinking three or more glasses of liquor per day possibly correlated with an increased risk of pancreatic cancer death in the total study population. Consumption of two or more drinks of liquor per day was purportedly linked with an augmented risk in both never smokers and those who had ever smoked. Susan M. Gapstur, Ph.D., M.P.H., and colleagues from the American Cancer Society, Atlanta, mention that this association appeared for liquor consumption but not for beer or wine.

The study is published in the March 14 issue of Archives of Internal Medicine, one of the JAMA/Archives journals.