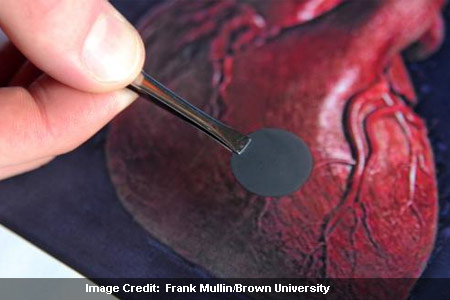 The following piece of discovery can probably benefit doctors treating heart disease patients. With a highly innovative approach, engineers from Brown University and the India Institute of Technology Kanpur have crafted a nanopatch with carbon nanofibers and a polymer to reverse heart attack damage. This novel technology apparently doubles neuron density and elevates the number of heart-tissue cells.

During the research in a lab, experts developed a scaffold-looking structure that contained nanofibers and a government-approved polymer. The synthetic nanopatch appears helpful in regenerating natural heart tissue cells known as cardiomyocytes, and neurons. Hence, a dead region of the heart can be seemingly brought back to life. The newly employed carbon nanofibers appearing like helical-shaped tubes have diameters between 60 and 200 nanometers. These nanofibers reportedly work well as they are good conductors of electrons.

Experts used the nanofibers together with a poly lactic-co-glycolic acid polymer to form a mesh about 22 millimeters long and 15 microns thick and resembling ‘a black Band Aid.’ The mesh was then placed on a glass substrate to see whether cardiomyocytes colonize the surface and grow more cells. In the course of the research, the 200-nanometer-diameter carbon nanofibers were seemingly seeded with cardiomyocytes. After a period of four hours, five times as many heart-tissue cells presumably colonized the surface than the control sample consisting the polymer alone.

On completion of five days, the density of the surface appeared six times greater than the control sample. Also an increment in neuron density was registered. The scaffold is not only elastic and durable, but also expands and contracts very much like heart tissue. David Stout, a graduate student in the School of Engineering at Brown and the lead investigator and colleagues are conducting further investigations to tweak the scaffold pattern to better mimic the electrical current of the heart. Also attempts are being made build an in-vitro model for testing how the material reacts to the heart’s voltage and beat regime.

The research is published in Acta Biomaterialia.