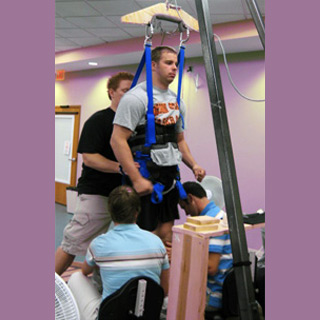 Some five years ago, Rob Summers met with an accident which left him paralyzed from below the chest, but now he can stand. Yes that’s true, scientists from the University of Louisville, UCLA and the California Institute of Technology have empowered him to stand up on his own and remain standing and bearing weight for up to four minutes at a time. With the help of periodic assistance, he can apparently stand for up to an hour.

Apart from that, Rob Summers can voluntarily move his toes, ankles, knees and hips on command. Through harness support and therapist assistance, he can allegedly make repeated stepping motions on a treadmill. During this study, continual direct electrical current was applied via implanted electrodes at varying frequencies and intensities to the part of the spinal cord that controls movement of the hips, knees, ankles and toes.

“This is a breakthrough. It opens up a huge opportunity to improve the daily functioning of (people with spinal cord injuries). But we have a long road ahead,” explained Susan Harkema, PhD, lead author on the article and a faculty member in the UofL Department of Neurosurgery.

This type of epidural stimulation is believed to mimic signals the brain normally sends to initiate movement. When that happens, the spinal cords’ own neural networks supposedly combined with the sensory input from the legs to the spinal cord, can direct the muscle and joint movements. This process is probably essential for standing up and stepping with assistance on a treadmill. Rob was also subjected to an extensive regimen of locomotor training. This training was conducted when the spinal cord was stimulated and he was suspended over the treadmill.

“This procedure has completely changed my life,” Rob Summers shared. “For someone who for four years was unable to even move a toe, to have the freedom and ability to stand on my own is the most amazing feeling. To be able to pick up my foot and step down again was unbelievable, but beyond all of that my sense of well-being has changed. My physique and muscle tone has improved greatly — so much that most people don’t even believe I am paralyzed. I believe that epidural stimulation will get me out of this chair.”

Thanks to rehabilitation specialists, that Rob could move his legs for retaining his spinal cord neural networks and produce the muscle movements vital to stand and take assisted steps. Experts predict that a portable stimulation unit and a walker can help people with complete spinal cord injuries to stand independently, maintain balance and execute some effective stepping. Hopefully, Rob will attain relief from secondary complications of complete spinal cord injury such as impairment or loss of bladder control, sphincter control and sexual response as well.

The study results have been published in the British medical journal The Lancet.