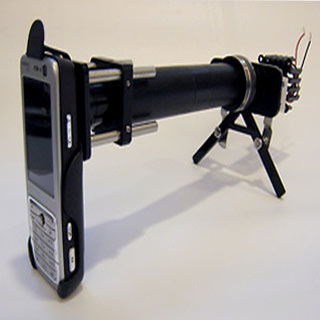 Mobile phones these days are not merely phones used for communicating, or capturing photos or even trying out a handful of applications, they are being utilized for more than that. Researchers at the University of California, Berkeley, seem to have built a cell phone microscope called as CellScope. Supposedly, CellScope not only takes color images of malaria parasites, but also of tuberculosis bacteria tagged with fluorescent markers.

The prototype CellScope is advancing as it seems to take clinical microscopy away from specialized laboratories and into field settings for disease screening and diagnoses.

“The same regions of the world that lack access to adequate health facilities are, paradoxically, well-served by mobile phone networks,” says Dan Fletcher, UC Berkeley associate professor of bioengineering and head of the research team developing the CellScope. “We can take advantage of these mobile networks to bring low-cost, easy-to-use lab equipment out to more remote settings.

For developing the model, engineers were noted to have joined compact microscope lenses to a holder fitted to a cell phone. With samples of infected blood and sputum, they were able to make use of the camera phone to capture bright field images of Plasmodium falciparum and sickle-shaped red blood cells. Plasmodium falciparum is known to be the parasite which causes malaria in humans. In addition, they were able to take fluorescent images of Mycobacterium tuberculosis, which causes TB in humans. Furthermore, they demonstrate that the TB bacteria could be automatically calculated via image analysis software.

Co-lead author of the study and a graduate student in the UC San Francisco/UC Berkeley Bioengineering Graduate Group, David Breslauer stated that, “The images can either be analyzed on site or wirelessly transmitted to clinical centers for remote diagnosis. The system could be used to help provide early warning of outbreaks by shortening the time needed to screen, diagnose and treat infectious diseases.”

Earlier, engineers seem to have revealed that a portable microscope built up on a mobile phone could be used for bright field microscopy. Allegedly, this bright field microscopy makes use of simple white light derived either from a bulb or sunlight in order to illuminate samples. This novel development was believed to include a fluorescent microscopy. Supposedly, in this microscopy, a special dye releases a specific fluorescent wavelength in order to label a target such as a parasite, bacteria or cell in the sample.

“Fluorescence microscopy requires more equipment — such as filters and special lighting — than a standard light microscope, which makes them more expensive. In this paper we’ve shown that the whole fluorescence system can be constructed on a cell phone using the existing camera and relatively inexpensive components,” elucidates Fletcher.

The researchers were believed to have made use of filters in order to block the background light and to restrict the light source, a simple light-emitting diode (LED), to the 460 nanometer wavelength. This nanometer wavelength appears to be essential in stimulating the green fluorescent dye in the TB-infected blood. Researchers seem to have achieved a spatial resolution of 1.2 micrometers with the help of an off-the-shelf phone with a 3.2 mega pixel camera. In contrast, a human red blood cell is nearly 7 micrometers in diameter.

Fletcher stated that, “LEDs are dramatically more powerful now than they were just a few years ago, and they are only getting better and cheaper. We had to disabuse ourselves of the notion that we needed to spend many thousands on a mercury arc lamp and high-sensitivity camera to get a meaningful image. We found that a high-powered LED – which retails for just a few dollars – coupled with a typical camera phone could produce a clinical quality image sufficient for our goal of detecting in a field setting some of the most common diseases in the developing world.”

The researchers were of the opinion that though fluorescent microscopes comprise additional parts, less training seemed to be required in order to interpret fluorescent images. Instead of sorting out pathogens from normal cells in the images from standard light microscopes, health workers only need to look for right size and shape in order to light up on the screen.

“Viewing fluorescent images are a bit like looking at stars at night. The bright green fluorescent light stands out clearly from the dark background. It’s this contrast in fluorescent imaging that allowed us to use standard computer algorithms to analyze the sample containing TB bacteria,” says Breslauer.

Breslauer further added that these software programs could be easily installed onto a typical cell phone, thereby turning the mobile phone into a self-contained field lab and a ‘good platform for epidemiological monitoring.’

“A CellScope device with fluorescence could potentially be used by patients undergoing chemotherapy who need to get regular blood counts. The patient could transmit from home the image or analyzed data to a health care professional, reducing the number of clinic visits necessary,” explains Fletcher.

Apparently, CellScope developers have been approached by experts in agriculture. Because these experts seem to be keen in using it in order to diagnose diseases in crops. A positive aspect of this model is that farmers could upload an image of the diseased leaf instead of sending in a leaf sample to a lab for analysis.

Researchers at present, seem to be developing many robust prototypes of the CellScope in order to prepare for further field testing.

This research has been published in the online journal PLOS ONE.