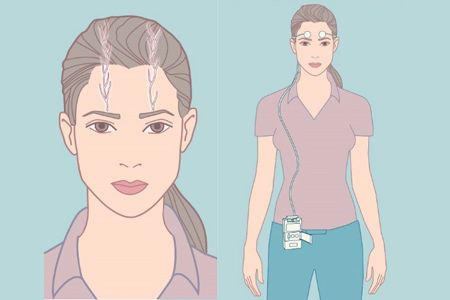 Although medications appear as the mainstay of treatment for epilepsy, a considerable number of patients don’t enjoy positive results. These patients apparently suffer from a type of epilepsy known as refractory or drug-resistant epilepsy, in which drugs can’t control their seizures. Well, Dr. Christopher DeGiorgio, a UCLA professor of neurology, has now introduced trigeminal nerve stimulation (TNS) that helps control seizures.

This non-invasive, non-pharmaceutical treatment allegedly showed a significant improvement in seizure reduction among 40 percent of the patients. The external stimulator is about the size of a large cell phone and attaches well to a belt or can slip into a pocket. Wires from the stimulator can be passed under the clothing and connected to conductive pads attached to the forehead. The electrodes, which can be covered by a cap or scarf, reportedly transmit a signal to the trigeminal nerve.

This signal possibly extends into the brain from the face and forehead for inhibiting seizure. The best thing about TNS is that it can be seemingly delivered at high frequencies bilaterally. As the electrical energy does not travel directly into the brain, TNS may serve as a safe method of brain modulation. After the 18-week study, 40 percent of patients receiving TNS registered a great improvement in seizure reduction. Scientists also claim that the TNS treatment boosts mood and enhances the quality of life of epilepsy patients.

The study was presented at an epilepsy conference last month.