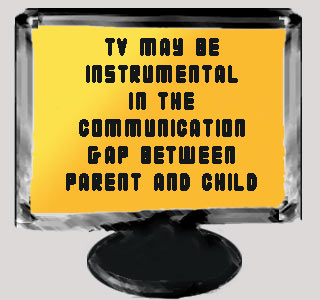 Technology may be called a twin-sided sword because in addition to its positive effects there may be a few negative effects as well. A new study has stated that TV noise may cause hindrance in effective communication between parents and their infants. This informative study was conducted by Dimitri A. Christakis, MD, MPH in collaboration with others.

These investigators have stated that every hour spent while the TV was audibly heard may reduce the amount of words spoken by parents and thereby reduce the infant’s vocalizations made in response.

For the purpose of better evaluating the effect that television viewing may bring about in parent-child communication, the investigators were stated to have analyzed more than 300 infants. The age of these infants seemingly varied from two months to about 48 months. Evidently for a period of 2 years, these infants were made to wear digital devices on random days, in order to record and witness the things that the child says or hears. These recordings were later assessed through a special program in order to determine the amount of interaction made between adults and children.

Apparently, it was observed that every hour of television viewing may be traced to a decrease in the number of words spoken by an adult to the child. To be precise, the decrease was of about 770 words in every additional hour of watched TV.

The investigators have explained that, “Some of these reductions are likely due to children being left alone in front of the television screen, but others likely reflect situations in which adults, though present, are distracted by the screen and not interacting with their infant in a discernible manner. At first blush, these findings may seem entirely intuitive. However, these findings must be interpreted in light of the fact that purveyors of infant DVDs claim that their products are designed to give parents and children a chance to interact with one another, an assertion that lacks empirical evidence.”

They have also stated that a wide number of infants may be exposed to television in their initial growing-up years. In fact the American Academy of Pediatrics is believed to have disapproved of TV or video watching in infants smaller than the age of 2. On the contrary they were also stated to have encouraged parents to mainly undergo interactive games with their infants.

This report was presented in the issue of one of JAMA/Archives journals called the Archives of Pediatrics & Adolescent Medicine.