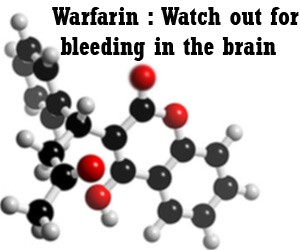 A new study makes a shocking revelation- the blood thinning drug warfarin may actually be increasing your vulnerability of brain haemorrhage. The study goes on to reveal that people who are on the drug may be doing more harm than good to themselves.

Warfarin is a drug administered to patients who are at risk of blood clot. Earlier studies have found the drug to help in the prevention of an abnormal heart rhythm called atrial fibrillation. However the current study conducted a team of scientist at the University of Cincinnati suggests that the blood thinning drug may in fact make the blood too thin increasing the risk of a haemorrhage, a type of stroke caused by bleeding in the brain.

“Warfarin is very effective for preventing ischemic strokes among people with atrial fibrillation and for most patients with this condition it is the right choice. However, people who have bleeding into the brain while taking warfarin are at greater risk of dying than other people with haemorrhagic stroke. This shows the importance of good monitoring and adjustment of warfarin dose. People should talk to their doctors about the proper management of warfarin and learn the signs of stroke so they can get to an emergency room immediately if a stroke occurs,” mentions Dr Matthew Flaherty, the lead researcher.

Carried out in the United States, the study analysed nearly 258 people with an average age of 69 years in Cincinnati who had brain haemorrhage. Of these volunteers, about 51 were taking warfarin. Researchers then conducted brain scans on these individuals to confirm the type of stroke and determine the size of the blood clots.

A comparison of individuals taking warfarin and suffering from brain haemorrhage and those who were not on warfarin showed that those in the former group had an international normalized ratio (INR) of 3. These participants also suffered from twice as much internal bleeding as against those not taking warfarin.

Warfarin has about 6.6 million prescriptions issued by the NHS in 2006. The researchers of this study however conclude that those who suffer from bleeding in the brain and taking warfarin are at higher risks of dying. This is mainly because its blood thinning properties may increase the risks of brain haemorrhage where a blood vessel bursts.

The study is published in the September 30, 2008 print issue of Neurology, the medical journal of the American Academy of Neurology.