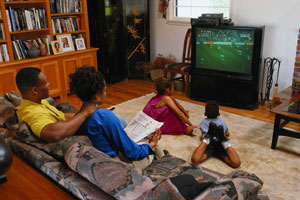 Turning off the television, picking up a crossword and eating more fish could be the key to a better memory, an Australian survey has found. Results of the on-line survey of almost 30,000 people, conducted as part of Australia’s science week, also found people who read fiction had better memories than those who don’t, while heavy drinkers found it more difficult to recall names.

But neuro-psychologist Nancy Pachana said television was not necessarily bad for memory, with wider health and diet and an active lifestyle more crucial to a good memory.

“Your memory is dependent on good health and good mental health,” Pachana, who is from the University of Queensland’s school of psychology, said.

Dubbed the National Memory Test, the quiz attracted 29,500 people who were tested on tasks such as remembering a shopping list, recalling names, faces and occupations, long-term recall and spotting differences between two photographs.

Those who took part in the test were asked to fill in a survey on a range of habits, such as alcohol consumption, television viewing and reading habits.

The results found no differences between men and women, with the same scores for both groups on all the tasks. But it found television viewing had the main impact on results.

“Turn off the box, or at least don’t view too much of it,” the survey results said, adding those who watched less than one hour a day performed better at all memory tasks.

Those who drank less than two alcoholic drinks a day performed better at all memory tasks.People who did crosswords were better at remembering shopping lists and recalling names, while eating fish once a week improved the ability to remember shopping lists.

However, it cautioned that while the test can give people an indication of their memory, the results have not been tested for statistical significance, and the internet survey meant it was possible that people could have cheated or lied. Pachana said having an active mind was important for memory, and some television programmes could be good for helping to improve the memory.

“Television can be a really passive activity, while reading is active,and any active activity is better,” she said, adding that television quiz shows and news programmes could be good for the mind.

She said health issues such as depression, obesity, lack of sleep and being stressed or worried could have an impact on a person’s performance in a memory test.