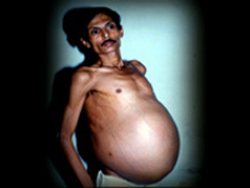 Living in the city of Nagpur, India, a man called Sanju Bhagat said that he’d felt self-conscious his whole life about his big belly. But one night in June 1999, his problem erupted into something larger than just a cosmetic worry. Doctors at the hospital thought it was a giant tumour, so they decided to operate and remove the source of the bulge in his stomach.

“Basically, the tumor was so big that it was pressing on his diaphragm and that’s why he was very breathless,” said Dr. Ajay Mehta of Tata Memorial Hospital in Mumbai. “Because of the sheer size of the tumor, it makes it difficult [to operate]. We anticipated a lot of problems.”

Mehta said that he can usually spot a tumor just after he begins an operation. But while operating on Bhagat, Mehta saw something he had never encountered. As he cut deeper into Bhagat’s stomach, gallons of fluid spilled out — and then something extraordinary happened.

“To my surprise and horror, I could shake hands with somebody inside,” he said. “It was a bit shocking for me.”
One doctor recalled that day in the operating room.

“He just put his hand inside and he said there are a lot of bones inside,” she said. “First, one limb came out, then another limb came out. Then some part of genitalia, then some part of hair, some limbs, jaws, limbs, hair.” Inside Bhagat’s stomach was a strange, half-formed creature that had feet and hands that were very developed. Its fingernails were quite long.

At first glance, it may look as if Bhagat had given birth. Actually, Mehta had removed the mutated body of Bhagat’s twin brother from his stomach. Bhagat, they discovered, had one of the world’s most bizarre medical conditions — fetus in fetu. It is an extremely rare abnormality that occurs when a fetus gets trapped inside its twin. The trapped fetus can survive as a parasite even past birth by forming an umbilical cordlike structure that leaches its twin’s blood supply until it grows so large that it starts to harm the host, at which point doctors usually intervene.

Fetus in fetu happens very early in a twin pregnancy, when one fetus wraps around and envelops the other. The dominant fetus grows, while the fetus that would have been its twin lives on throughout the pregnancy, feeding off its host twin like a kind of parasite. Usually, both twins die before birth from the strain of sharing a placenta.

Sometimes, however, as in Bhagat’s case, the host twin survives and is delivered. What makes his case so unusual is that no one suspected Bhagat had a twin inside him for 36 years.