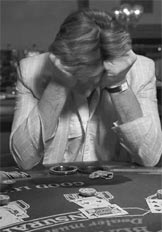 Scottish scientists have discovered that drugs used to heal Parkinson’s disease actually end up turning its patients into gambling addicts.

A survey of patients carried out in western Scotland revealed that around 10 percent of those taking dopamine agents had become problem gamblers, The Scotsman reported. A research team from Southern General Hospital in Glasgow tracked 251 Parkinson’s patients who were taking different drug combinations.

Many of the patients who became addicted were already regular bettors before they went on Parkinson’s medication. But the raise was often dramatic, like the patient who went from spending 10 pounds a week gambling to 1,500 pounds a week.

One 71-year-old man lost a five-figure sum gambling on the internet.

Parkinson’s patients appear to suffer from low levels of dopamine. Dopamine plays a role in addiction by helping the brain to recognize sources of pleasure.

Robert Brown, a Glasgow psychologist, said that what patients using dopamine are likely to turn to depends on what they have access to.

Brown said, “There is a tradition of gambling across the whole of Scotland, with more gamblers per head of population than in England and Wales.” He added, “But people on these drugs could equally turn to alcohol or other ways of finding arousal or escape.”

Dr Kieran Breen, the director of research at the Parkinson’s Disease Society, said the Scottish research was one of the first studies to try to assess the extent of the link between gambling addiction and dopamine agonists.

“Some people’s brain chemistry might make them more susceptible to the effects of dopamine agonists, meaning they may develop gambling problems or other addictions.”