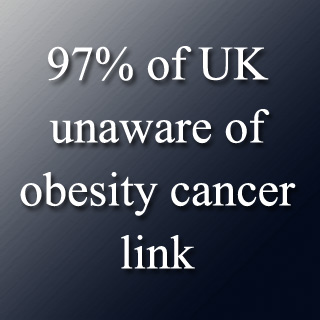 It is estimated that nearly 97 percent of people are unaware of the link between weight and cancer. This finding was revealed by the Cancer Research in the UK.

After smoking, obesity is known to be one of the major cancer risks. A survey was noted to have been conducted with approximately 4,000 people. The survey findings revealed that merely 3 percent stated about maintaining a healthy bodyweight as something which people could possibly be able to do in order to reduce their risk of cancer.

In addition, about 7 percent of them seemed to be unsuccessful in naming a single positive change which people could possibly make in order to assist in preventing the disease. Also, nearly, two thirds of people mentioned of leaving smoking in order to reduce cancer risk.

Sara Hiom, director of health information at Cancer Research UK, stated that, “Encouraging people to change their behavior is often difficult, but the first step is to build awareness that these changes are worth making. We have estimated that more than 13,000 cases of cancer could be prevented each year if everyone maintained a healthy weight. While many people may associate weight with being healthy in general, this survey shows that most people don’t link it directly with their risk of cancer, or don’t know how much it can reduce their risk.”

Approximately 59 percent of people claimed that food and diet seems to be essential and 29 per cent were of the opinion that additional exercising may possibly aid in reducing cancer risks.

Hiom further added saying that, “It may be hard for people to make the link between obesity and an increased risk of cancer because we generally associate having the disease with being underweight. But carrying extra weight means producing more chemicals in our bodies that can cause cancer to develop.

“We know it can be hard to make long-lasting changes to our lifestyles, like quitting smoking and cutting down on alcohol. But it’s important that people are aware of the things that they can do – and the extent to which these changes will affect their cancer risk – so that they can make informed choices. Leading a healthy life with a balanced diet and plenty of exercise does not guarantee that a person won’t get cancer but these healthy habits can help to cut the odds,” elucidates Hiom.

Furthermore, about 22 percent of people at random said that alcohol could influence their chances of developing the disease. Whereas 11 percent said that protecting one’s skin in the sun appears to be essential.

Thus, if one wants to avoid cancer, one must slim down, take regular exercise and ditch those breakfast fry-ups.