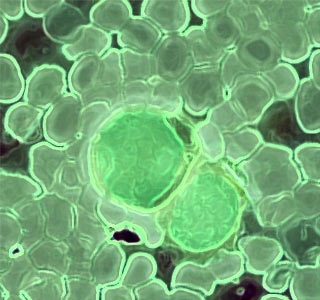 A team of experts from the Tel Aviv University are believed to have discovered a new alternative to the use of chemotherapy in children with acute leukemia. The new JAK2 inhibitor drug appears to have potential for use in the treatment of childhood leukemia.

Leukemia is believed to be a fatal cancer of the blood, which seems to be a commonly occurring cancer in children. The Leukemia and Lymphoma Society has estimated that annually around 4,500 American children may be diagnosed with leukemia.

These researchers were believed to be the first to have discovered a mutation of the JAK2 protein in patients suffering from Down syndrome. They presumed that this particular protein may also be linked with other disorders, which proved to the case. On the basis of their research findings a particular drug, trialed for treating blood disease, was believed to also be useful for children with acute leukemia. On proving its effectiveness in the trail, this drug could probably be put to use for the treatment of acute childhood leukemia.

“Modern medicine can cure eight out of 10 cases of childhood leukemia, so parents can still be hopeful when they hear a diagnosis,” says Dr. Shai Izraeli of Tel Aviv University’s Sackler School of Medicine and Sheba Medical Center. “Our research gives hope and life to the 20% who might not make it as well as those who may experience a relapse.”

Mutations in the JAK2 protein were evidently first discovered in children with Down syndrome, who later seemed to have developed leukemia. Dr. Izraeli says that those children having the greatest risk of suffering from leukemia could possibly be treated with JAK2 inhibitors. These findings are believed to give “potential hope” to the children with this disease. Apparently, JAK2 inhibitor is notably not based on chemotherapy and also seems to have few side effects.

New trials may soon be conducted on the way these findings may be applicable in the adults and children suffering from high-risk leukemia. Typical chemotherapies for leukemia are believed to have long-term and permanent damage on the patients. Thus, those in search for a safer and better alternative may possibly perceive this particular research as promising.

These findings have been based on Dr. Izraeli’s original discovery of the JAK2 in Down syndrome, presented recently in The Lancet journal.