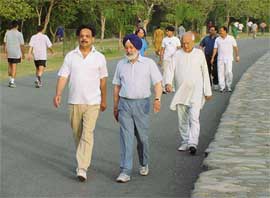 A team of researchers at Indiana University have conducted a study which has revealed that individuals suffering from blood pressure can benefit a much greater deal by taking three to four brisk walks rather than spending time at the gymnasium working out.

The study which was conducted by a team of researchers at Indiana University was led by Janet P. Wallace, professor in the Department of Kinesiology at the IU School of Health, Physical Education and Recreation.

They found that both forms of exercise, accumulated and continuous, decreased study participants’ blood pressure by the same amount – a discovery that Wallace admits left them surprised.

“We had no idea the short bouts would be better. Most studies found in the literature report the long, continuous session as more effective for many variables,” she said.

The drop is significant because a reduction of 5 mm Hg in systolic blood pressure has been reported to substantially reduce mortality and to reduce the incidence of stroke and coronary heart disease.