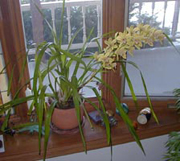 Houseplants could be the source of many an allergy sufferer’s misery, a study from Belgium suggests. Symptoms of up to 20 percent of people with allergic rhinitis, meaning runny nose and sneezing, may be due to exposure to these plants, Dr. Olivier Michel of the Free University of Brussels said.

It’s estimated that up to 40 percent of people in the Western world suffer from allergic rhinitis, he and his colleagues point out in a report in the journal Allergy. A 1985 study suggested that the weeping fig tree, a type of ficus tree that exudes latex, could be a source of inhaled allergens. Decorative plants are becoming increasingly common in public spaces, workplaces and homes.
Michel and his team tested 59 allergic rhinitis sufferers and a control group of 15 healthy individuals for sensitization to ficus, yucca, ivy, palm tree and other common ornamental plants using a skin prick test.

Seventy-eight percent of the allergic rhinitis patients were sensitized to at least one of the plants. No one in the control group was sensitized to the test plants.

Sensitization doesn’t necessarily mean a person’s allergic symptoms are due to a particular substance, Michel noted in an interview, adding that a person must then see if symptoms disappear if exposure to the substance stops.

For two patients in the study who were allergic to ficus, removing the plant from their environment stopped their symptoms completely.

Additional studies are needed to confirm the findings, the researchers say. Nevertheless, says Michel, makers of allergy testing products should begin producing tests for identifying sensitization to common houseplants such as ficus.