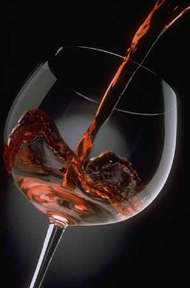 Compared to mice that received ethanol or water, the mice that were given Cabernet Sauvignon experienced significantly reduced Alzheimer’s disease-type brain deterioration of memory function.

The researchers, from Mount Sinai School of Medicine in New York City, found Cabernet Sauvignon’s benefits were due to its ability to prevent the generation of proteins that cause plaque build-up in the brain, which is the main characteristic of Alzheimer’s disease.

“This study supports epidemiological evidence indicating that moderate wine consumption, within the range recommended by the FDA dietary guidelines of one drink per day for women and two for men, may help reduce the relative risk for AD clinical dementia,” researchers Dr. Giulio Maria Pasinetti and Dr. Jun Wang said in a prepared statement.

Increased immunity to colds may lead to worse asthma flare-ups