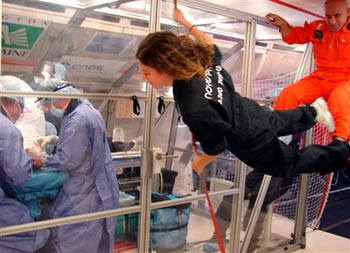 On Wednesday, a team of French doctors performed the very first operation on a human being in zero-gravity conditions, to remove a cyst from the arm of a man. The five-man medical team made history by slicing off the cyst that floated away from the patient, tied to a string. While the surgery was being performed, the aircraft soared and dived to create weightlessness.

The team of doctors worked in intervals of 22 seconds during conditions of weightlessness. It took 22 intervals to complete the surgery. The flight lasted three hours, but the operation took just over eight minutes — about the same amount of time that such surgery would have taken in a hospital, doctors said.

The operation took three years to plan and was part of a three-phase exploration of weightless surgery. This day in medical history paves the way toward performing surgery in space in the future, via a surgeon or even a remote controlled robot. This operation was also an experiment that may one day be instructive for future medical emergency on the international space station.

Three surgeons, two anesthetists and a cameraman were strapped to the walls with mountain-climbers’ gear as the aircraft dipped and soared in roller coaster-like parabolas to achieve intervals of weightlessness.

“We have done a simple technical procedure, but everything we noticed shows that operating on a human in space conditions will not present insurmountable problems,” said Dr. Dominique Martin, leader of the medical team.

Patient Philippe Sanchot — chosen because he is an avid bungee jumper, hardened to the shocks of G-force strains — was given a local anesthetic and remained awake throughout the operation. He said that post-operation he was a bit tired, as his head was spinning.

In the experiment, the plane flew loops 20,000 feet to 27,560 feet over the southwestern city of Bordeaux. The pilot of the specially designed 330 Zero G aircraft cut back the engines at the peak of a climb, allowing near-weightless drift downward. After a near nose-dive, the pilot soared upward at angles of up to 45 degrees.

TV film showed doctors operating in what appeared to be near normal conditions — except for a small pink object floating near their hands. A doctor flicked it away at one point. A piece of tissue then eerily floated upward.

Martin declined to discuss phase three, which will test zero-gravity procedures carried out by a robot controlled from the ground. If funding permits, that test could happen next year, he said.

The operation was supported by the French National Center for Space Studies and the European Space Agency.