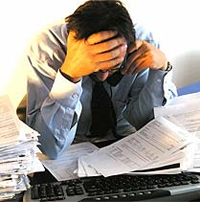 Try not to get worked up for trivial issues, for hormones produced during periods of stress may increase the growth rate of cancer cells, researchers at the Ohio State University have found. The study showed that an increase in norepinephrine – a stress hormone, could stimulate tumour cells to produce two compounds. These compounds can then break down the tissue around the tumour cells and allow the cells to more easily move into the bloodstream. From there they can travel to another location in the body to form additional tumours, a process called metastasis.

The research also suggests the same hormone can also stimulate the tumour cells to release another compound that can aid in the growth of new blood vessels that feed cancer cells, hastening the growth and spread of the disease.

Ronald Glaser, a professor of molecular virology, immunology and medical genetics, and director of the Institute for Behavioural Medicine Research at Ohio State University, explained “This opens up an entirely new way of looking at stress and cancer that’s different from current interpretations.”

“This suggests a new approach to possibly fight some cancers the prescribing of beta-blocker-type drugs that would block these receptors and perhaps slow the progression of the disease,” Glaser added.

Earlier work by researcher Anil Sood at the University of Texas had shown that the same stress hormones could also stimulate ovarian tumour cells to produce compounds that can accelerate the growth of cancer cells.

“Using this approach may not cure this cancer but perhaps we could slow down its growth, making the tumor more sensitive to anti-cancer therapy, and therefore extending the patient’s lifespan and improve their quality of life,” the researchers concluded.