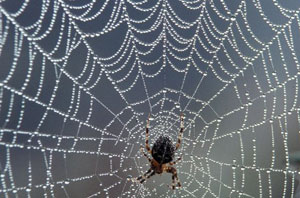 Spider web silk, which is the strongest natural fibre is known to man, could actually possess medical potential in artificial tendons or for regenerating ligaments, scientists now say. In fact, folklore that dates back to at least 2,000 years tells of the potential medical value of spider webs in fighting infections, stemming bleeding and healing wounds, molecular biologist Randolf Lewis explained

Although research has found no tangible evidence so far that spider webs can kill germs, Lewis says that studies on animals have revealed that spider silk triggers little if any immune responses, which cause rejection of medical implants. So he and his colleagues are busy spinning spider silks into fibres, in hope that they might just be useful in the field of medicine.

Lewis also said that spider webs could be used as scaffolds for regenerating ligaments damaged in one of the world’s most common knee injuries-ruptured anterior cruciate ligaments, or ACLs. He also said that they were looking into the use of spider silk for artificial tendons.

At the moment, scientists are also developing spider silk to make exceptionally fine sutures for stitching up surgeries or wounds to nerves or eyes. This will help them heal without any scarring.

“Right now we haven’t even optimized the silks we’ve produced yet, and we’re in the ballpark of the material properties you’d want for artificial tendons and ligaments,” Lewis said.

Lastly Lewis said that their lab is pursuing the production of spider silk in alfalfa.