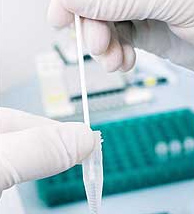 According to new research conducted at the Karolinska Institutet in Stockholm and in the United States, a new DNA test may prove helpful in identifying prostate cancer. The test would supplement current methods, including so-called PSA tests that have relatively low sensitivity.

“In the near future, it will be possible to combine PSA tests with simple genetic tests,” according to Professor Henrik Gronberg at the Karolinska Institutet.

“Fewer men will have to undergo unnecessary biopsies and … more prostate cancer diagnoses can be made,” he said.

Researchers have so far identified five gene variants that affect the risk of prostate cancer that has been linked to inherited factors.

By analyzing “the cumulative effect of these gene variants,” researchers were able to state “that men who carry four or more risk variants run a four to five times greater risk of developing prostate cancer.”

Men with a family history of prostate cancer were even more at risk.

The study, “Cumulative Association of Five Genetic Variants with Prostate Cancer,” was presented in the January 17 edition of the New England Journal of Medicine.