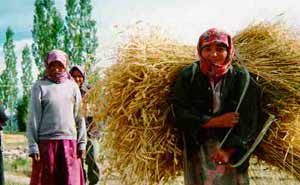 A woman’s choice of career may impact her risk of developing breast cancer, a Canadian study found. Researchers looked at personal, medical and detailed occupational histories of 1, 100 Canadian women, including 564 who had been diagnosed with Breast Cancer. They hope to identify occupations linked to increased breast cancer risk.

The data showed that those who had cancer were almost three times more likely to have worked on farms, many during adolescence when breast tissue id believed to be vulnerable to toxic exposures. The study also found that women who had worked on farms and then went on to work in Canada’s auto manufacturing sector or health care jobs faced an even higher risk of developing the disease.

“The evidence points to a possible link between increased breast cancer risk and certain occupational settings, study author James Brophy said. He also explained that agents present in agricultural settings may make a woman more susceptible to breast cancer, especially if she is exposed to these agents early in her life. Subsequent exposures in other settings may further compound the risk and promote the disease development.

However, further research is necessary to pinpoint the chemical agents in participants’ work environments possibly responsible for the increased incidence of breast cancer.