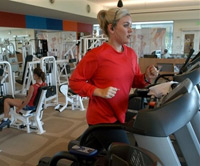 There is a food pyramid to help and guide people’s eating habits, and now there will be a whole set of guidelines for physical activity. It’s about time, since people all over the world are realizing the importance of exercise.

The guidelines will be ready by 2008, federal health officials say. They hope that these guidelines will help people live healthier lifestyles, which in turn could help to slow down rising health care costs.

Mike Leavitt, the health and human services secretary says, “Obesity is an epidemic, and chronic disease inevitably follows. It has become a major quiet killer.”

Leavitt said the government has a compelling national interest in promoting healthy choices. But he made it clear that the steps he envisions are less forceful than others might consider necessary. For instance, New York City is considering strict limits on artificial trans fats in restaurant meals.

“You cannot create a culture of wellness through regulations and penalties,” Leavitt said.

Leavitt said he would begin meeting with the beverage and snack industry, as well as marketing and media groups, about how to create a “culture of wellness.”

“If we simply burden people with guilt or we appeal only to their fears, it won’t happen,” he said.

The government already makes recommendations about exercise. The new pyramid, for example, recommends 30 minutes of daily physical activity, says 60 minutes is needed to prevent weight gain and 90 minutes may be needed to sustain weight loss.
The surgeon general issued a report in the mid 1990s that contained recommendations on exercise.

Officials said the new guidelines, however, would establish a process where the best science on physical activity would be routinely evaluated.