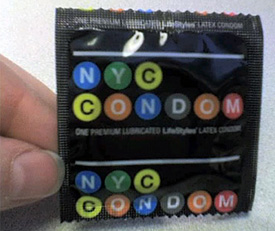 New York City’s health department has come up with a rather interesting way to promote the increased use of condoms. The department has designed the subway-themed condoms, which are being promoted with the slogans “New York we’ve got you covered,” and the provocative “NYC condoms. Get some” ones.

They are of one common size, in other words ‘one-size-fits-all condoms’ that are available in black packaging featuring colored circles that spell out “NYC Condom” in the style of the city’s subway. Other suggested designs had featured city skyscrapers.

“Not enough condoms are being used,” Health Commissioner Thomas Frieden said, revealing the design. “This is about brands. Brands work, they increase use, they increase distribution,” he added.

The condoms even have their own website, with a .org address. “You can decide what the org stands for,” Frieden added.

The health department, which already gives 18 million free condoms a year, was to provide 150,000 free condoms in the city on Wednesday itself.

The new branding received mixed reactions. “I think it’s a great idea,” said one 48-year-old man picking up a free sample on Manhattan’s Fifth Avenue, while another dismissed it as “kind of silly. It doesn’t take safe sex seriously.”

“It’s unbelievable. I think whoever thought this up has a great sense of humor,” said an anonymous 76-year-old man, pocketing a handful.