A new ‘sticking plaster’ treatment that can be used in the patient’s home or at a GP’s surgery could be a ground breaking development in the treatment of skin cancer. 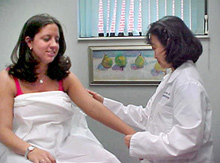 The high tech plaster is in the form of a bandage which can be conveniently worn by patients. This compact device has already undergone successful human tests. It contains its own light source ,an organic light-emitting diode, which is emitted when a low voltage electric current goes through it and has been proved to significantly reduce pain in patients.

Professor Ifor Samuel and dermatology consultant Professor James Ferguson who developed the product over a period of four years said that the technology was an adaptation of the photodynamic therapy treatment (PDT), an anti-scarring treatment in which a light source activates a photosensitive drug that kills the infected cells. This system calls for the patient to lie for several hours under large light sources in hospitals.

The new ‘bandage’ cure is definitely more convenient as patients can save a trip to the hospital and still be treated. This novel cure has already found many takers with its low cost, light weight and effectiveness being lauded by many.

Professor Ferguson added that multiple areas of the skin could be healed at a single time saying “We have tried it on more than 20 patients so far and the results are comparable with standard hospital PDT treatment.” Experts also claim that using the plaster is less painful as lower levels of light are used to treat the cancer.

Skin cancer affects almost 10% of the Scottish population and it is believed that many more will suffer from this disease at some point in their lives.The treatment could thus be a boon to millions although experts report that more serious melanoma skin cancer forms would need surgery or radiotherapy. The treatment is also believed to have cosmetic uses in areas such as anti-aging and acne.