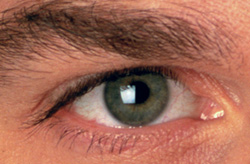 It is said that the eyes are a windows to our souls. But now our eyes could reveal the status of our health and help doctors predict if we have any life threatening disease. Conventional vision tests reveal eyesight abnormalities, such as macular degeneration.

However, according to professor Emanuel Rosen, of Rosen Eye Associates, Manchester, a test of retina can identify early signs of conditions such as heart disease, cancer and diabetes, thanks to its superior image.

The new eye test by an upgraded ‘ophthalmoscope’ a traditional instrument used to examine the retina and vitreous takes only three minutes and can help doctors diagnose life-threatening disease, it said.

The eye is very much an early warning post since its blood vessels allow us to see a mini-version of the body’s circulatory system before the patient experiences symptoms, explained professor Rosen.

For example, if there are narrow arteries in the eye’s blood vessels, it is likely that person has thinning arteries elsewhere, Rosen said.

Many other potentially fatal diseases can be first detected in the eye:

The retina is the light-sensitive part of the eye on which images are produced. Along with the optic nerve, it is linked to the brain and is therefore part of the central nervous system. So any changes in the retina can reflect problems elsewhere in the body, the researcher said.