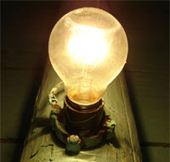 Commercial light bulbs could be used to fight tumours, providing an effective and cheap replacement for laser surgery, scientists in Israel say.

“We used off-the-shelf technology as an alternative to laser beams,” said Jeffrey Gordon of Ben-Gurion University in southern Israel, lead researcher in a new study on the subject.

The study showed that light from an ultra-bright commercial bulb, similar to that used in movie projectors, could be concentrated by a special optical system to burn away healthy tissue in rats.

“For the first time ever we were able to kill tissue using the non-laser lamp,” Gordon said.

He said that the tests would be repeated on cancerous tissue of larger animals and eventually in humans in the next few years, in hopes of producing similar results with malignant tumors.

Laser systems currently used to treat tumors can cost up to $100,000. Gordon said that the new light bulb systems might eventually be sold for about $1,000.