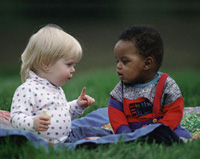 A study conducted at the University of Texas states that children may be savvier at a younger age when separating fact from fiction as compared to what their parents think.

Children normally learn to separate what’s real from what’s pretend between the ages of 3 year and 5 years, the research said.

Jacqueline Woolley, professor of psychology at the University of Texas at Austin said, “These studies provide new insight into the development of children’s ability to make the fantasy-reality distinction.”

Woolley’s team studied children ages 3 to 6 years by reading stories that were either imaginary or fact-based, then asking about whether words represented something real or something pretend.

As expected, younger subjects were the most likely to think all words were real, while older ones could differentiate real from fiction, researchers said.

However researchers learned something else – distinguishing between real and fantasy may be contextual as well as age-related. After listening to a factual story, the children expected more “real” words, not a mix of facts and fantasy, researchers said. After listening to imaginative stories, the children may have thought that some words in the word test were from an imaginary place.