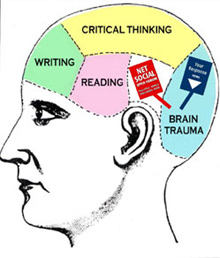 Alcoholics should stop drinking as soon as possible, because according to a new research, brains can recover from alcoholic damage, and this research has also revealed the brain’s capacity to regenerate. But there is one condition; the sooner one kicks the habit, the more they may actually recover.

The findings of this research used sophisticated scanning technology and computer software to measure how brain volume, form and function changes over a period of six to seven weeks of abstaining from alcohol. 15 alcohol-dependent patients, out of whom 10 were men and 5 women, took part in the research.

The researchers measured patients’ brain volume at the beginning of the study and again after 38 days of sobriety. They found that the patients’ brain volume had increased by an average of nearly 2 per cent during this period. Besides, the levels of two chemicals, which are the indicators for how well the brain’s nerve cells and sheaths are constituted, rose significantly.

The increase of the nerve cell marker, matched with the patients performing better in a test of attention and concentration. But only one patient seemed to continue to lose some brain volume. But he happened to be the patient who had also been an alcoholic for the longest time compared to the others.

The leader of the research, Dr. Andreas Bartsch from the University of Wuerzburg, Germany, said: “The core message from this study is that, for alcoholics, abstinence pays off and enables the brain to regain some substance and to perform better. However, our research also provides evidence that the longer you drink excessively, the more you risk losing this capacity for regeneration. Therefore, alcoholics must not put off the time when they decide to seek help and stop drinking; the sooner they do it, the better.”

Dr. Bartsch, who is senior neuroradiology resident and head of the structural and functional MR-imaging laboratory of the Department of Neuroradiology at the University of Wuerzburg, said the study was one of the first to be able to integrate data that showed how the brain regained volume and function early on, once alcoholics, who had no complicating factors, had stopped drinking alcohol.

The patients’ brains were scanned using magnetic resonance imaging (MRI) and proton MR-spectroscopy upon admission and after short-term sobriety. Only the patients that managed to abstain from alcohol without receiving any psychotherapeutic medication were included in the study, and those with secondary alcohol-induced disorders, as well as heavy cigarette smokers (more than 10 cigarettes a day), were excluded.