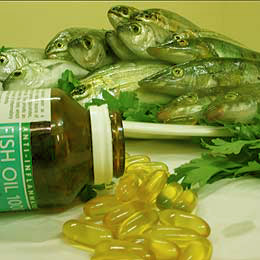 Fish oil supplements given to pregnant mums boost the hand-eye coordination of their babies as toddlers, reveals a small study published ahead of print in the Archives of Disease in Childhood (Fetal and Neonatal Edition).

This press release issued by Eurekalert says that the researchers base their findings on 98 pregnant women, who were either given 4g of fish oil supplements or 4g of olive oil supplements daily from 20 weeks of pregnancy until the birth of their babies.
Only non-smokers and those who did not routinely eat more than two weekly portions of fish were included in the study. Eighty three mothers completed the study.

Once the children had reached two and a half years of age, they were assessed using validated tests to measure growth and development.

These included tests of language, behaviour, practical reasoning and hand-eye coordination. In all, 72 children were assessed (33 in the fish oil group and 39 in the olive oil group).

There were no significant overall differences in language skills and growth between the two groups of children .
But those whose mothers had taken fish oil supplements scored more highly on measures of receptive language (comprehension), average phrase length, and vocabulary.

This finding held true even after taking into account other potentially influential factors, such as the mother’s age and duration of breast feeding.

The findings show that relatively high doses of omega 3 rich fish oil supplements in the second half of pregnancy do not seem to have any adverse effects on neurodevelopment or growth, they add.