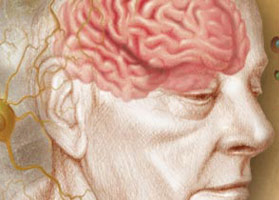 Scientists in Britain claim to have created an antibody that can be used as preventive treatment for people with a family history of Alzheimer’s. Alzheimer’s is a progressive brain disorder that gradually destroys a person’s memory and ability to learn reason and make judgments.

The researchers led by Dr Emma Kidd at Cardiff University said they created an antibody which could block the production of brain chemicals ‘amyloid’ that are linked to the debilitating disease, reported the online edition of BBC News.

Deposits of amyloid build up in the brain, preventing it from functioning properly. The antibody will reduce this build-up, improving the patient’s memory and quality of life, the researchers claim.

“We believe that our approach could lead in time to a new therapy for this distressing and debilitating disease as it should prevent or reduce the irreversible deterioration of a patient’s memory and other brain functions,” they said.

A final treatment could take several years to develop and the team are now seeking more money for the next stage of the work.

There is no known cure for Alzheimer’s, which causes irreversible loss of brain function and memory. The disease affects one in 20 people aged over 65 and a fifth of all people aged over 80 in Britain.