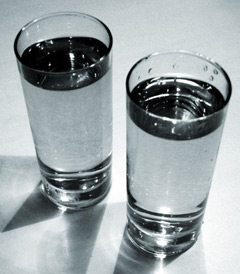 Limiting salt in diet and drinking plenty of water are the best ways to prevent the most common types of kidney stones or slow their growth among children, say paediatricians.

They are now becoming a fairly common condition among children, reported Newswise wire quoting paediatricians at the Johns Hopkins Children’s Center. “The trend is growing and disturbing,” they said.

Too much salt and too little drinking water in children’s diets are probably the main culprits.

A good way for a child to tell if he or she is drinking enough water is the urge to urinate every three hours. If a child urinates less frequently than that, it might be a sign of dehydration, said urologist Yegappan Lakshmanan, co-director of the center’s paediatric stone clinic.

The doctors also recommend consuming no more than 2.4 grams of sodium a day, or 6 grams (1 teaspoon) of table salt a day. They advice children to stay away from salty snacks such as chips and pretzels, which they say are loaded with sodium. Processed foods, including smoked and cured meats, as well as sodas and canned products have the highest sodium content, they say.

Look for “no salt added” or “low sodium” labels when buying food. Rinse canned foods under water to remove some of the sodium. Tea, coffee, dark chocolate, spinach, nuts and wheat bran can also increase the risk of certain types of kidney stones.

A child needs to drink two litres (64 ounces) of water a day. Sugar-laden juices and sodas don’t count as proper hydration, they say.

“Clearly, when it comes to water consumption, what is needed is a cultural change, and schools have to play a role in making bottled water available and limiting soft drinks, as well as allowing children to visit the restroom as needed,” Lakshmanan says.

“More and more children with kidney stones are coming to us,” says kidney specialist Alicia Neu, M.D., co-director of the kidney stone clinic at the Children’s Center. “While this is somewhat unexpected, it is not totally surprising given that so many other conditions are on the rise in children due to poor diet, such as high blood pressure, type 2 diabetes and obesity to name a few.”