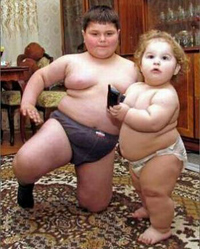 A newly conducted research states that loads of kids are fat by preschool itself, and amongst them the Hispanic youngsters are at maximum risk. This research is apparently the first ever to highlight on the aspect of children growing up in poverty. The study couldn’t explain the difference: White, black and Hispanic youngsters all watched a lot of TV, and researchers spotted no other huge differences between the families.

However one important determining factor of a plump preschooler was whether the child was still using a bottle at the stunning age of 3, concluded the study being published online Thursday by the American Journal of Public Health.

Lead researcher Rachel Kimbro of the University of Wisconsin, Madison said, “These children are already disadvantaged because their families are poor, and by age 3 they are on track for a lifetime of health problems related to obesity.”

Around 17 percent of U.S. youngsters are obese, and millions more are overweight. Obesity can lead to diabetes, high blood pressure and cholesterol, sleep problems and other disorders — and the problem starts early. Overweight preschoolers have a five times higher risk of being fat at age 12 than do lean preschoolers, scientists reported last fall.

Kimbro focused on the poor, gathering data on more than 2,000 3-year-olds from a study that tracks from birth children born to low-income families in 20 large U.S. cities.

What could be the probable reason behind the fact that Hispanics were at higher risk? Kimbro analyzed a series of factors, from children’s TV habits to whether mothers had easy access to grocery stores. Nothing could fully explain the difference. “We were surprised,” she said.

That finding supports other research that “one of the most common causes of overweight in children is overfeeding,” said Dr. Philip Nader, a pediatrician and professor emeritus at the University of California at San Diego.

Pediatricians say even babies should never carry their bottle along with them to bed and that children should start drinking from a cup around age 1.

Kimbo now wonders what cultural differences — such as whether Hispanic mothers think chubby children are healthier — might also play a role, something the current study couldn’t address.