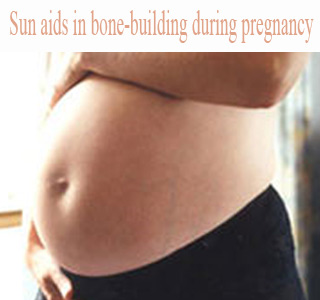 The ALSPAC is a long-term health research project, also called the Children of the 90s. As the name suggests, all the children were born in 1991 and 1992. The researchers assessed and evaluated the meteorological data of those particular years, in order to verify the probable sun exposure of the mother in the last three months of her pregnancy.

About 7,000 children were later measured at age 10 and also had to undergo DXA scans in order to ascertain their bone density. It was discovered that the children born to mothers with the highest amount of sun exposure were on an average about half a centimeter taller as compared to the other kids. These children were also found to have wider bones, about 12.75 cm² extra bone area in comparison to their lesser sunlight receiving counterparts.

It is stated that taller individuals usually have wider bones; however in these taller children it was noticed that they had an increased bone width in addition to their higher bone width credited to their height. The researchers state that this added bone mass advantage could be credited to the Vitamin D levels. These researchers say that Vitamin D is very essential for bone-building even in a child in the womb.

Jon Tobias, Professor of Rheumatology, Bristol University, says that, “Wider bones are thought to be stronger and less prone to breaking as a result of osteoporosis in later life, so anything that affects early bone development is significant. Pregnant women might consider talking to their doctor about taking Vitamin D supplements, particularly if their babies are due between November and May, when sunlight levels are low.”

Along with the assessment of the meteorological data, the Vitamin D level in about 350 mother’s blood in their 37th week of pregnancy was also measured. The results yielded the same levels of sun exposure.