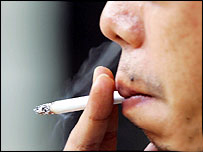 A group of researchers have now found that smokers are at double the risk of tuberculosis, when compared to non-smokers. hough the evidence was more limited due to a substantially smaller number of studies, they also found evidence of an association between smoking, passive smoking and indoor air pollution and TB infection, disease and mortality.

They plan to conduct larger and much more rigorously designed studies in the future to substantiate that association.

“Since tobacco smoking has increased in developing countries where TB is prevalent, a considerable portion of the global burden of TB may be attributed to tobacco. Importantly, this also implies that smoking cessation might provide benefits for global TB control in addition to those for chronic diseases,” said Majid Ezzati, an associate professor of international health at Harvard School of Public Health.

“Our findings suggest that information on people’s exposure to respirable pollutants from sources such as smoking and biomass use will help TB detection efforts. Additionally, TB control programs may benefit from including interventions aimed at reducing tobacco and IAP exposure, especially among those at high risk for exposure to infection,” added Ezzati.