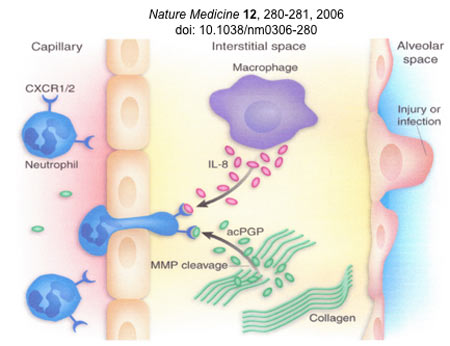 We had earlier elucidated the dangerous effects that cigarette smoke can have on the lungs even at the smallest level. Researchers from the University of Alabama in Birmingham now explain the way cigarette smoke is capable of restraining an important enzyme in airways. This enzyme known as Leukotriene A4 Hydrolase (LTA4H) is said to be responsible in regulating the body’s reactions to inflammation.

Scientists from UAB state that the smoke hampers the enzymes ability to shut down white blood cells, subsequently after they have managed to take appropriate action on the inflammation. In the research, the team found that PGP, proline-glycine-proline which was previously unknown is a substrate of LTA4H. In the case of a normal swelling, the PGP’s task is to employ neutrophils or white blood cells. These neutrophils charge and attack the root cause of the inflammation. Supposedly at the end of the job, LTA4H enters the scenario to close down PGP, thus in turn stopping the enrollment of neutrophils eventually halting the body’s defensive stand.

“We found, however, that cigarette smoke inhibited LTA4H, preventing it from shutting down PGP,” stated J. Edwin Blalock, Ph.D., senior author and professor in the UAB Division of Pulmonary, Allergy and Critical Care Medicine. “A continued presence of PGP means a continued response of neutrophils, a never-ending cycle that supports chronic inflammation.”

Blalock further added that PGP is known to be a biomarker for quite a few lung diseases, which exhibit chronic inflammation. Few of these are cystic fibrosis and chronic obstructive pulmonary disease (COPD). The research explains that the LTA4H might be able to play a double role, where in it can suppress or encourage swellings. When, the LTA4H is enclosed in a cell allegedly it participates in a pro-inflammatory job of producing Leukotriene B4 (LTB4), an agent which is quite similar to PGP. This agent is claimed to summon the neutrophils as and when required. On the other hand when it is found outside a cell for instance when its cell dies, it shifts to an anti-inflammatory role, wherein its job is to stop the growth of PGP, in order to end the body’s response to the inflammation.

“This dual role was poorly understood until we identified PGP,” said Blalock. “This could have important ramifications for the design of new anti-inflammatory drugs that target LTA4H.

He commented that an excess of LTB4 could lead to chronic inflammation. Hence, pharmaceutical manufacturers are looking into the possibility of drugs which can inhibit LTA4H, which in turn would lead to reduction of LTB4. Blalock proposed a need for revision in the approach, further adding that drugs which are said to be in design, would minimize LTB4 by closing down LTA4H. However according to this research it is known that the LTA4H plays a beneficial role too, in reducing the PGP. If only LTB4 is inhibited it might be good for the body, however if LTA4H’s capability to shut down PGP is also blocked at the same time it can make the situation worse.

These findings are published online in the Science Express.