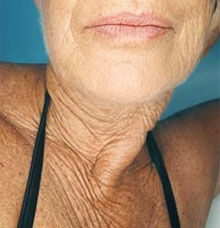 Women may soon no longer have to turn to plastic surgery to get rid of those pesky wrinkles, thanks to a researcher at the Hebrew University Faculty of Agriculture, Food and Environmental Quality Sciences who has developed a new method to fight wrinkles.

The method has been developed by Dr. Orit Bossi under the supervision of Zecharia Madar, the Karl Bach Professor of Agricultural Biochemistry at the Hebrew University, and Prof. Shlomo Grossman of Bar-Ilan University.

When there is an excess of free radicals, however, as occurs during normal aging or as a result of excessive exposure to ultra-violet radiation from the sun, the result, among other things, is a breakdown of the collagen and elastin fibers in the skin.

When this happens, there is a loss of skin elasticity and the formation of wrinkles.

“A problem with many of the commercial antioxidants found today in the market that are said to retard the aging process is that they oxidize quickly and therefore their efficiency declines with time,” said Dr. Bossi.

“Vitamin C, for example, oxidizes rapidly and is sensitive to high temperatures. This is also true of the antioxidant EGCG which is found in green tea, and vitamin E.

As a part of her research, Dr. Bossi conducted experiments on mice skin tissue, which resembles that of humans.

The untreated cells showed a rise in free radicals causing wrinkles, while those cells which had been treated showed no significant increase in the free radicals level.

“The antioxidant which I used in my research is able to withstand high temperatures, is soluble in water, and does not oxidize easily and thus remains effective over time,” she said.

Dr. Bossi is looking towards a new generation of cosmetic products which will not only combat wrinkles but will be more effective against deeper levels of skin wrinkles than current products.