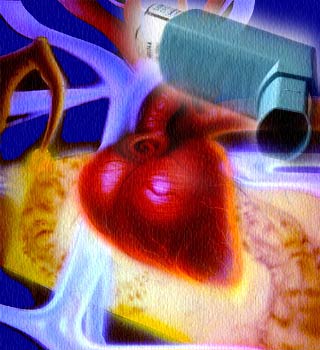 A common prescription for chronic obstructive pulmonary disease (COPD) and bronchitis is inhaled lung medication. Use of inhalers to treat these lung ailments could in fact increase the risk of some fatal heart conditions, reveals a new study.

Common drugs sold in the US and Canada that include tiotropium or Spiriva or the older medication ipratropium, available generically and under the brand name Atrovent were identified by researchers as those that could up the risks of heart attacks, strokes and deaths from coronary disease. These drugs are taken by patients to relax muscles and open airways in the lungs.

According to researchers from Wake Forest University School of Medicine in the US and the University of East Anglia in the UK, more than two million prescriptions for anticholinergic inhalers were issued in England last year.

Study author Dr. Sonal Singh of Wake Forest University’s medical school reveals that for every 40 patients using either drug for a year would mean one death linked to the medication.

Researcher Dr Yoon Loke, mentioned, “It is a relatively small risk – about 3% of users develop problems – but the risk is serious. They may cause heart attacks and death. There are alternatives. If you know that your inhaler contains anticholinergics, my advice would be to ask your doctor to prescribe a different inhaler, particularly if you have a history of heart trouble or are at high risk of heart disease.”

An analysis of data from nearly 17 international studies that included more than 14,700 people led researchers to believe that the widely used inhalers may in fact pose an increased risk of deadly heart problems. Health risks of people who took the drugs to treat symptoms of COPD and those who took other inhaled medications for the same symptoms or a placebo was compared by the team of researchers.

A close examination of these people showed that among about 7,400 patients who took either inhaled drugs, nearly 1.8% or 135 people contracted heart problems over several years. In the second group of about 7,300 people however 1.2% or 86 people had heart problems. These heart conditions were fatal in some cases. They thus found these drugs to increase the risk of heart attack by 53% and the chances of cardiovascular death by 80%.

Researchers emphasize that the risks of using an inhaler need to be balanced by its benefits. A patient must look at improving the quality of his/her life to prevent disease exacerbations and COPD-related hospitalisations.