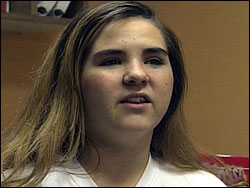 Jennifer Mee, a teenager in Florida finally took a long breath, after she went on hiccupping continuously for five weeks.

“Jennifer Mee had a few more spasms, but then she stopped and took her first uninterrupted breaths since … January 23,” the paper stated.

Mee had started hiccupping Jan. 23 close to 50 times a minute and said it only stopped when she was sleeping.

It is yet unknown as to what exactly has cured the 15-year-old girl from the western Florida city of St. Petersburg, who had hiccupped almost uninterrupted for weeks.

Mee had seen an infectious disease specialist, a neurologist, a chiropractor, a hypnotist and an acupuncturist, took prescription medication and tried a patented device designed to stop hiccups, the paper said.

“Right now, my nose is burning and my throat hurts.” But she felt a lot better than she has in weeks, the St. Petersburg Times said.