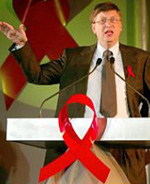 In an effort to create awareness among people living with HIV/AIDS, and also to bring down the soaring figure of AIDS patients, the Indian Government got a boost when the Bill and Melinda Gates Foundation announced that it would be making a $23 million grant to India.

The Bill and Melinda Gates Foundation entered into an agreement the Union Governement of India to pledge an investment of $23 million for India’s HIV Prevention Response. The fund will be provided to the National AIDS Control Organization over the next three years to combat HIV.

The money will also be used to fund groups that work with high risk segments of the population, such as sex workers, homosexuals, truck drivers, migrants, drug users and laborers.

Meanwhile, the Indian Govt. has planned a series of ad campaigns to create awareness among people living with HIV/AIDS. It started the campaign with information on providing free of cost Antiretroviral Treatment (ART) drugs in more then 95 state-run hospitals.

“We have been providing ART drugs free of cost to 45,000 people. But we want to scale the number to one lakh. Many people are ignorant of this fact and we want to create awareness among them,” Director General of NACO, Sujatha Rao said.