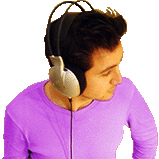 British scientists said Wednesday, that Music therapy may help to ease the depression, anxiety and emotional withdrawal symptoms of schizophrenia.

In a small study in four hospitals, researchers at Imperial College London found that encouraging patients to express themselves through music seemed to improve their symptoms.

“We have known for some time that psychological treatments can help people with schizophrenia, but these have only been used when people are fairly stable,” said Dr. Mike Crawford, the author of the study published in the British Journal of Psychiatry.

“This study shows that music therapy provides a way of working with people when they are acutely unwell,” he added.
Schizophrenia affects about 1 per cent of people in Britain and the United States.

The illness usually begins in the late teens and early 20s and is characterised by hallucinations, delusions, hearing voices and changes in behavior.

Treatments such as atypical antipsychotic drugs focus on eliminating the symptoms. But the drugs can cause side effects such as weight gain, an increased risk of diabetes and sexual dysfunction.

The patients in the study received standard therapy alone or with the musical component, which consisted of eight to 12 music sessions.

They were encouraged to express themselves with a range of musical instruments.

After measuring the symptoms in the patients, Crawford and his team found greater improvements in the music therapy group.
Although they could not completely rule out other factors, such as the severity of the illness, they believe the findings warrant further study and a larger trial.

“Music therapy may provide a means of enhancing the effectiveness of in-patient treatment by reducing some of the symptoms of schizophrenia that respond least well to drug treatment,” Crawford added.