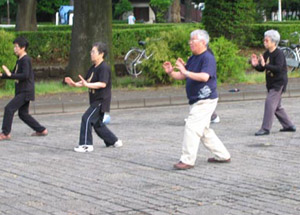 Tai Chi, a traditional Chinese form of exercise can help older adults avoid painful shingles by boosting their immunity. A study published in the April issue of the Journal of the American Geriatrics Society says that when older adults were given shingles vaccine and practiced Tai Chi, their immunity against the disease was considerably high.

Tai Chi is basically a martial art form thought to be a mixture of karate and Yoga which has a myriad of health benefits. Shingles is a painful disease caused by the varicella-zoster virus (VZV). It presents as a painful, blistery rash and affects at least one third of adults aged over 60.

Anyone who has had chickenpox as a child is at risk for developing shingles after the age of 50. The National Institute of Neurological Disorders and Stroke (NINDS) says that the first sign of shingles is often burning or tingling pain, or sometimes numbness or itch, in one particular location on only one side of the body.

For the first 16 weeks, the participants took part in Tai Chi or a health education program that provided 120 minutes of instruction weekly. Following this, participants in both groups were given a single injection of VARIVAX. The latter is a chickenpox vaccine approved for use in 1995.

Lead author Michael Irwin, professor of psychiatry at the Semel Institute for Neuroscience and Human Behavior at UCLA, said the study was exciting as it showed behavioral modifications like Tai Chi were capable of triggering a positive, virus-specific immune response.

In patients who were given shingles vaccine and advised Tai Chi, the immunity levels were comparable to those normally seen in middle age. The Tai Chi group also demonstrated significant improvements in physical functioning, bodily pain, vitality and mental health.

“Since older adults often show blunted protective responses to vaccines, this study suggests that T’ai chi is an approach that might complement and augment the efficacy of other vaccines, such as influenza,” Irwin pointed out.