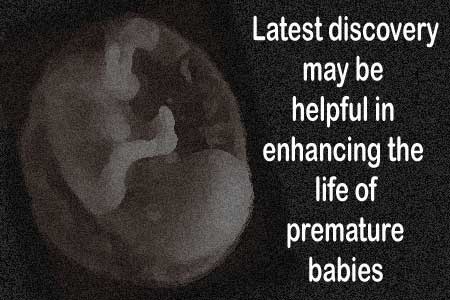 According to a latest research, a new prospective way has been, supposedly, discovered, which says, altering the lung development in the embryo may, apparently, aid in the outcome of very premature babies.

This research was conducted by the researchers at the Cardiff University, and the Saban Research Institute at Los Angeles Children’s Hospital. They have, apparently, unveiled a crucial element which is believed to be a prospective drug target, in early lung development, for the treatment of very premature babies with tiny, immature lungs.

This particular research was conducted in the laboratory of Dr. Daniela Riccardi, and Professor Paul Kemp of Cardiff University; along with Professor David Warburton of the Saban Research Institute.

Dr. Riccardi and associates have also, apparently, uncovered the role played by the calcium receptor (CaR) molecule. CaR, apparently, is of great help in controlling lung development in the womb. It’s also stated that from within the fetus, the CaR synchronizes messages that initiate the lungs to develop innumerable small air pockets and channels. It’s believed that this process, supposedly, permits the free flow of oxygen in the air into the blood stream of the baby.

Professor Kemp says that, presently drugs are available that are believed to be capable of altering the CaR function, which in turn would, apparently, modify lung development. The researchers believe that CaR performs by sensing calcium, and also that presently drugs are in use which, apparently, regulate the calcium usage in the body. Professor Kemp says, “If we can show that one of these drugs can modulate the action of CaR in the lung, it could be used to mature the lungs of a very premature baby as it grows. Better still, an existing drug could potentially be approved much more quickly than a new one.”

Dr. Riccardi states, “Through our research we have gained a better understanding of how lungs develop normally and so we can now begin to work out what happens when things go wrong, such as when a baby is born much too early. From the work we have published today, we now have a real possibility for fast-tracking new drugs for helping these very premature babies.”

Dr. Riccardi says that, babies, on birth, depend on their lungs to supply them with oxygen. Supposedly, since lung development takes place very late in pregnancy, it’s believed that the lungs of premature babies are not very mature enough to take in sufficient oxygen. She further says that, this is one of the reasons for an increased fatal risk faced by premature babies. It’s also said that some under-developed lungs are not capable of taking in the required amount of oxygen, which may cause chronic lung disease in premature babies with respiratory problems, throughout their lives.

This research was funded by the Biotechnology and Biological Sciences Research Council (BBSRC).

Their findings are published in The Journal of Physiology.