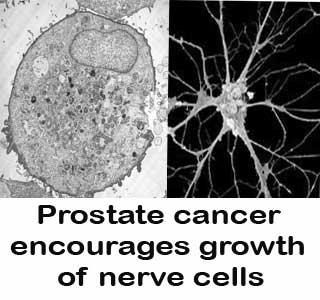 A research conducted by the Baylor College of Medicine (BCM), says that prostate cancer could encourage the growth of new nerves and also the branching axons, which convey their messages.

Earlier researches on this topic have revealed that prostate cancer follows the growth of nerves; however this research states that it encourages nerve growth.

Dr. Gustavo Ayala, professor of pathology and urology at BCM, and first author of the research, says that, “This is the first report of this phenomenon. It represents an important new target in prostate cancer treatment, as prostate cancers are more aggressive when neurogenesis is present.”

Ayala further says that, “We also believe that axongenesis and neurogenesis is found not only in prostate cancer, but is potentially a more global phenomenon, particularly relating to those cancers that grow along nerve paths.” He states that this discovery is similar to the discovery of angiogenesis or growth of new blood vessels. Both of these are an element of the wound repair system.

Ayala made use of an entire prostate gland, in order to reconstruct the prostate. He did so, so that the scientists could witness the growth of nerves and axons in three-dimensions. This computerized process required continuous computer processing.

This research was funded by the National Institutes of Health and the Tumor Microenvironment Network of the National Cancer Institute and its findings are published in the Clinical Cancer Research journal.