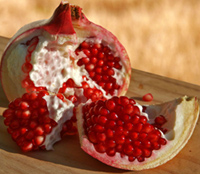 Milton Schiffenbauer, a biology professor at Pace University in New York, tested pomegranate juice and POMx liquid extract and found them to be effective in the destruction of bacteria S. mutans, known to cause cavities, S. aureus, the most common cause of staph infections, and B. cereus, a common cause of food poisoning.

The addition of pomegranate products to various oral agents, including toothpaste and mouthwash, gave these agents an anti-microbial effect, according to Schiffenbauer.

The findings are being presented at the American Society for Microbiology’s annual meeting in Toronto.

Brain Pathway of Depression located by Stanford Researchers during Study on...