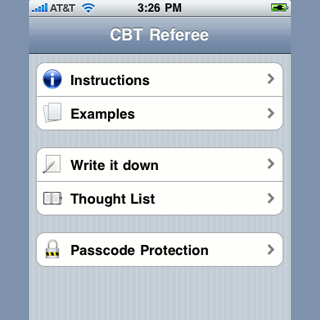 iPhone and Android apps are turning their attention towards mental health. At least this seems to explain the release of a new app named CBTReferee, which equips users with mobile tools to aid them in Cognitive Behavioral Therapy. This therapy is a kind of psychotherapy that includes journaling and reflecting to discourage dysfunctional emotions and feelings.

The app is quite easy and handy as CBTReferee provides a medium for users to put down their thoughts and analyze from them while on the move. Cognitive Behavioral Therapy, or CBT, is claimed to be a psychotherapeutic approach that aspires to unravel issues regarding negative emotions, behaviors and cognitions via a goal-oriented, methodical process.

This treatment needs the patient to note down negative thoughts or feelings, investigate them by observing cognitive traps like generalization or catastrophic thinking. Also, one has to then pen down a healthier statement which is quite optimistic in nature. The difficulty is that negative thoughts don’t always arise in a therapist’s office, or when one has a notebook and pen available. Owing to these reasons, this app is quite useful as it is always 24/7 with the users, wherever they are.

Andrew Arrow, creator of CBTReferee, commented, “I found myself always needing to carry around a notebook to practice CBT, since negative thoughts and feelings happen at random. As a result, I decided to build a simple app for my own use. Finding it personally effective, I decided to put it in the app store, not really knowing if it would be useful for others.”

Arrow adds, “The power of CBT comes from actually taking the time to write down your thoughts. A major caveat is that people try CBT and never get very far because they attempt to do the exercises mentally without ever writing anything down – whether it be because they don’t have paper and a pen on hand or because their thoughts can be off-putting. In this respect, CBTReferee provides a convenient, easy option.”

The app can be started on the user’s mobile device every time a negative thought arises. There are three easy steps to offer Cognitive Behavioral Therapy in an effortless, planned way. The app navigates the user in penning down a negative thought. The subsequent screen supplies a roll of ten possible erroneous beliefs that are perhaps there in the statement.

A few them of may comprise of Nothing or All, Conclusion Jumping, Emotions as Evidence and several others. One can scroll through the list and choose the misleading notion that seems to be pertinent to their pessimistic statement. The user is provided with a type-in screen named, ‘Referee Says’. On this screen, based on the statement and the myths selected, the user is incited to enter in an objective evaluation to cancel out the pessimistic statement. CBTReferee maintains a ‘thought record’, facilitating users to observe preceding thoughts and take note of the patterns in the manner that they think.

The Apple iTunes and the Android market can be accessed for purchasing CBTReferee. The app carries a price tag of $4.99.