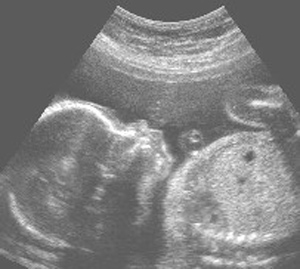 Professor Karen Brøndum-Nielsen, of the Kennedy Institute, Glostrup, Denmark, has demonstrated that non-invasive screening of pregnant women with ultrasound early in pregnancy, combined with maternal blood analysis, has reduced the number of children born in Denmark with Down Syndrome by 50 percent.

She also explained that another advantage of the introduction of this practice in her country was a drop in the number of invasive pre-natal diagnostic procedures from 11% to around 6% of pregnancies.

“Previously this was restricted to pregnant women over 35 years of age, but since the implementation of the new guidelines it has been available to any woman who wants it,” Professor Brøndum-Nielsen said.

The women were offered a measurement of nuchal translucency in the fetus by ultrasound. This test looks at thickness of the black space (fluid) in the neck area of the fetus.

If there is more than the normal amount of fluid the risk of Down syndrome is increased. Likewise if there is a certain combination of serum markers in the maternal blood test, taken at the same time, there is the possibility of an increased risk of a chromosomal abnormality. The combined screening is carried out at 11 to 14 weeks of gestation.

Professor Brøndum-Nielsen and her team looked at the effects of the new guidelines in 2004, 2005, and 2006, in 3 counties in Denmark with a total population of 1.1 million inhabitants, or about one-fifth of the population of the country. They compared these findings with national figures obtained from the Central Cytogenetic Registry, which confirmed the reduction in invasive procedures and the number of children born with Down syndrome at national level.

“When we looked further at the history of children born with Down Syndrome, we found that their mothers had declined the offer of screening, or had taken it up too late in pregnancy”, she says.

Women whose test results showed an elevated risk were offered an invasive procedure (chorionic villus sampling or amniocentesis) to certainly corroborate or exclude the diagnosis of Down syndrome by chromosome analysis.

“Although we have not yet studied the whole of the population, these numbers are significant enough to show that the new guidelines have been accepted by a great majority of Danish parents. However, there is a need for analysis of the psychosocial aspects, both as to the pre-test counseling and the women’s attitudes,” she says.